Energy Usage
Reading an electric bill can be surprisingly challenging when determining how much energy is actually being used. After adding a solar electric system to the equation, you may begin to keep an eye on your energy usage more regularly. There are many things that can be confusing when determining charges, kilowatt usage, reserves and credits. The first thing to locate on your bill is the “energy usage” column. In the model below, you will see it highlighted in blue.

When reading an electric bill you will see both “credits” and “charges” which can sometimes be misinterpreted. Keep in mind that if there are kilowatts being “returned” or “credited” that means the system has produced more energy than what has been used and the excess electricity will go back to the the grid. This doesn’t mean you lose it forever though, nor does it mean this is all you produced. For example, you may have produced 200 kW in the month and only sent 20 to the grid. You actually used the remaining 175 kW during the month as it was being produced. 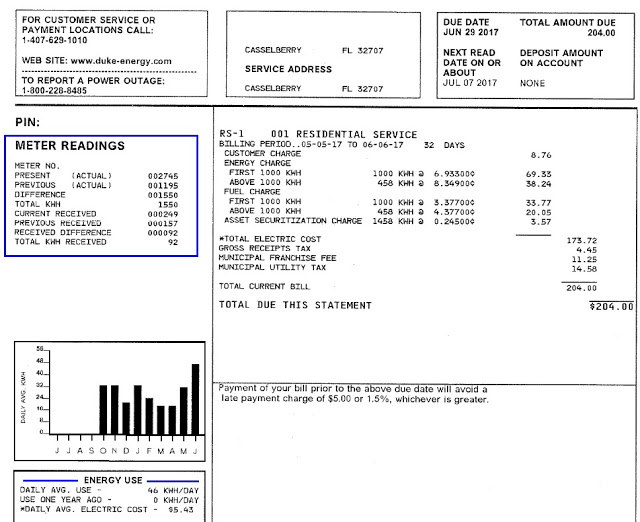 Solar Production
The best way to determine if a solar system is producing to it’s full potential is to compare the last 12 months of usage. Because each environment is different and weather conditions can affect usage, each solar system is averaged off of a 12 month period of time.

The best way to determine if a solar system is producing to it’s full potential is to compare the last 12 months of usage. Because each environment is different and weather conditions can affect usage, each solar system is averaged off of a 12 month period of time.

Precipitation can be a large factor in solar production. In months that produce a lot of rain or snow, solar panels will produce less energy based off of natural weather conditions. Solar systems are engineered to be installed at the most south-facing angle of a roof space to reach optimum sunlight and solar panel potential. Although calculations can be extremely accurate and locations can be designed with precision, weather still has to be taken into consideration for solar production.

In Florida, all solar installs require a new meter. They are provided by the local electric company to monitor usage and solar energy production. This serves as an important purpose in tracking energy usage and an accurate electric usage record.

Click HERE to request a complimentary consolation to find what other sources of energy saving tools iQ Power has to offer.

We believe in the power of the sun and all the benefits solar can provide to our customers and the environment. We strive to be an industry leader in our practices, methods an product placement. We place the highest priority on working together as a team to provide our customers with exceptional service due to our consistency, ethical standards and actions. We aim to be admired for the best service, informed communication, quick turn-around times, and expertly installed quality products. We are committed to excellence in everything we do and strive to continuously improve. We are passionate about achieving results that exceed our customers' expectations and save our customers money for years to come on their electric bills. We are committed to our team and provide a workplace where growth and development opportunities are available .

iQ Power is a leader in solar energy, solar pool, solar hot water, solar electric photovoltaic and solar powered homes. Our solar systems are an easy way for homeowners to do their part in helping the environment and adding value to their homes by making them solar powered.